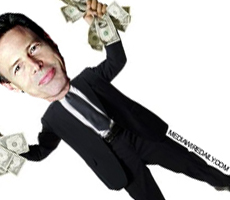 We here it every day at Sensible City: the media is dying. But our attitude in this regard seems to stand lonesome, so we thought it might be worth a post.

While PR firms, “industry leaders” and CEOs line up with explanations (most of which have to do with advertising revenues and the cost of paper), nobody seems to be putting in much comment on the fact that the majority of the layoffs, buyouts and pink slips we are seeing are pointed at a particular group: the core producers of editorial and creative content. The second major group: marketing and sales.

Meanwhile the C level pay cuts are pretty dingy. This doesn’t represent the entire market, but its worth noting a common strategy:

How to save your news media giant in tough times:

The above, of course, is a dramatization. So here is the question. Is the media dying, or is the big money media dying? Truth is there is a bit of both. But at a time when news editors are making less than McDonald’s managers and news CEOs are making more than bankers, we really would be wise to stop blaming everything on the recession.

So what about the news media companies that are successful and growing? Why are they so quiet at a time when big media is ducking tomatoes? I’ll post the results of that research next week.