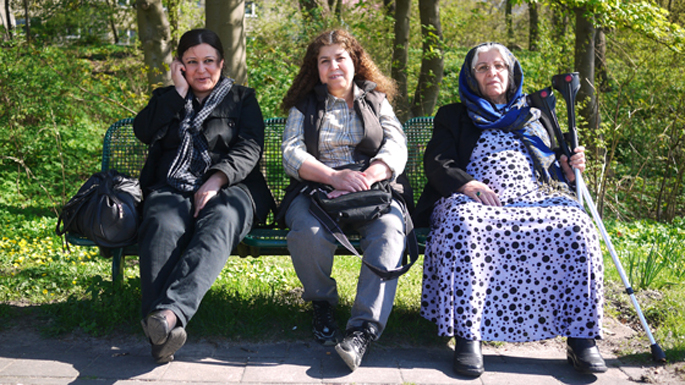 Under the header ‘what Kieler want’, the Clear Village team arrived in Gaarden, a district of Kiel in North Germany, to conduct qualitative interviews  for making a well-being analysis of the community and distill solutions to help bring about the future they wish for.

Kiel is a City historically dominated by its proximity to the Baltic Sea. In fact, the City has built up on both shores of the Bay, making water and water carried trade and traffic very present in the City. On the western shore is the old market town, main infrastructural, educational and financial institutions. The Eastern shore has always been where the maritime production of all sorts took place. Therefore, the eastern shore was heavily bombed under WWII as a strategic point (u-boats where build here) for the allied forces. In the fifties, a built environment was hastely reinforced to accommodate the shipyard workers and keep the industry running in Kiel.
It is one of those estates, that we are focusing on in this analyses, and it has, to this day a connection to both water and shipyards. But also hasn’t been untouched by German demographic development over the last couple decades, creating a diachomy of ‘the old’ and ‘the new’ residents. This is typical for many European Cities of this size and very interesting to dig into!

Gaarden, the  eastern district of Kiel that Clear Village is working on, is less than a mile from the city centre. However, many see themselves segregated from city-life, in terms of understanding, opportunity and connectivity. Many factors reinforce this belief, but it is brutally manifested by a main road and a cargo container parking spatially separating Gaarden from the view to the bay -and the city itself.

Click here to watch the videos from the original post on Clear Village’s first days  in Gaarden.