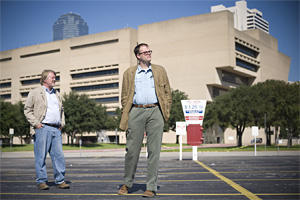 Imagine, if you will, a utopia smack in the heart of downtown Dallas. In this green, sustainable building of tomorrow, you might roll out of bed, take a shower and find your runoff water feeding vegetation growing on the roof and walls, upon which you’ll feast later that night. Or maybe you’ll move downtown and become a cattle rancher several stories above the concrete jungle. Or perhaps you’ll grab a bite in the slow-food café downstairs after knocking off your shift working the counter in the holistic pharmacy next door.

Solar panels heat and light your home, and the high-tech and the natural mesh seamlessly in aLogan’s-Run-to-a-kibbutz kind of way. It’s a place so inviting, so self-contained that there’s really not much reason to ever leave home.

The possibilities, say the three architectural firms competing to design this future world, are endless—so much so they can’t really pin down what life in their buildings would be like, which is precisely what makes it so hard to believe one will ever exist. But if local affordable housing advocates Brent Brown and John Greenan have their way—and they insist they will—this world of tomorrow might be a lot closer than you think.