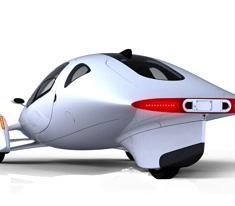 The new Aptera 2e vehicles traveling throughout New York have many area residents curious about the futuristic-looking motorcycle, its creators say.

While its windswept shape recalls jet aircraft, the Aptera 2e could also be the silicon sister of Eve, the streamlined robot from the animated film “Wall-E.” And as it glided silently through Lower Manhattan on Wednesday, the three-wheeled electric car seemed as futuristic and provocative as Wall-E’s icy-white object of desire. From children to usually stoic cops, onlookers pointed, grinned and gaped at this ultralight two-seater, which its backers said would go on sale later this year.

The Aptera took its star turn for the media, including a video I’m shooting for this Web site, at the Classic Car Club in SoHo. The car’s California-based backers discussed everything from the price — $25,000 to $40,000 depending on the powertrain — to its roughly 100-mile driving range, top speed of 90 miles an hour and eight-hour charge time on a normal household outlet.

[Read more about it at the New York Times]

Posted in Other News