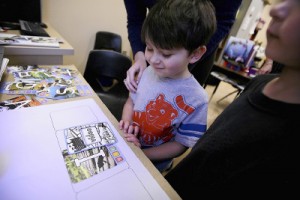 A menagerie of virtual 3-D animals that swim, eat bugs and fly are building crucial reading skills in autistic children at Audubon Park Elementary in Orlando.

Four-year-old Christopher Gómez lined up a set of specialized word and animal cards, including one with the letter ‘I’ and a picture of an iguana under a camera to compose the sentence, “The iguana can eat.”

Christopher shifted his eyes toward a projection screen, smiled and said, “I like the iguana!” as the reptile appeared to pop off the card and onto the screen to eat an insect. A woman’s voice simultaneously spoke the sentence displayed above the screen.

“A static image has little meaning to Christopher, but a three-dimensional image that interacts with him through movement and sound makes a lasting impression because it becomes functional,” said Mary-Elizabeth Langston, Audubon Park’s primary special education teacher. “I hear the children throughout the day repeating the sounds they learned.”

Audubon Park is the first school in the nation to test the preschool and kindergarten program developed by Logical Choice Technologies, an educational firm based in Georgia.

The program costs $995 and contains the software, a document camera, 26 alphabet cards illustrated with animals and a set of 94 flash cards with common pronouns, adjectives, adverbs, prepositions, conjunctions and verbs necessary for developing reading skills before a child enters the second grade.

When the animal and word cards are joined in a sentence under the camera, the animals perform the actions, but only if that particular creature is capable of such movement. For example, in the sentence, “The giraffe can fly,” the 3-D giraffe will shake its head from left to right to show it cannot do it.

“Students learn what these actions mean, how they are performed, and how they are spelled based on real animals in their natural habitat,” said Audra Cervi, the school’s reading resource teacher.

The user can also flip the animal card to show all sides of the creature. If the teacher presses a colored tab on the card, a 3-D letter replaces the animal. Teachers can show students all sides of the letter. These features appeal especially to autistic students who focus more on visuals as they learn language.

Teachers at Audubon Park, which acquired the program in October, said so far there has been no measurable improvement in their students’ skills. But Langston said students are more socially engaged since they launched the technology.

“We’re starting to see the difference in how they form sounds and words,” she said. “I’ve noticed more eye contact with others, and there’s a willingness to learn that we had not seen before.”…